Landshare won the award for Best Green Use of Mobile Apps and Technologies last night at the Green Awards for the Landshare iPhone app. The awards were presented at a stunning awards ceremony in the Natural History Museum in London, and presented by design icon Wayne Hemmingway, with a number of speakers. One of the highlights of the event was a presentation by David Attenborough, who received a standing ovation.

River Cottage’s Landshare app competed against tough competition from Toyota, with their excellent glass of water app, the Royal Horticultural Society’s Grow Your Own app, and ‘Brent Going Green’ by the London Borough of Brent.

Landshare was nominated after a combined public and judges vote, so thank you to all of you who voted for us. The Landshare award was accepted first in a video response by Hugh Fearnley-Whittingstall, before a kilted Craig Hunter, KEO North Executive, accepted the trophy along with Head of Creative Simon Deverell and River Cottage MD Rob Love.

The Green Awards support creativity in sustainability, and are truly global, with winners from China, Sweden and the USA. Winners across all categories included the National Trust, Ecomodo, and Toyota Sweden. 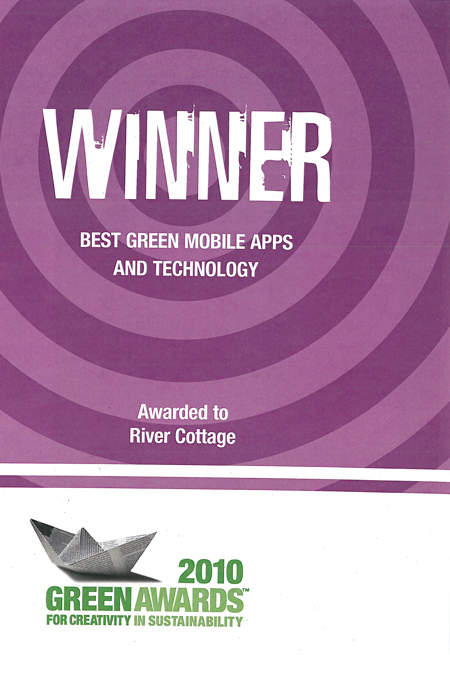